(Tomorrow, we produce Episode 2: Paying for School Today and Tomorrow. I wrote this article to prepare for that episode.) 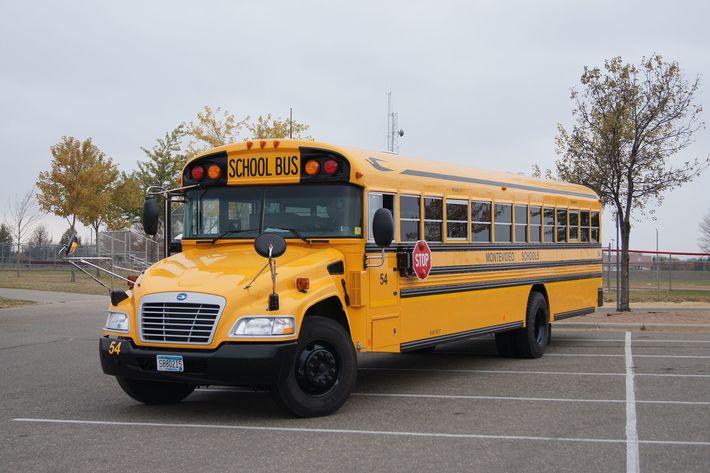 More than most countries, the United States relies upon school buses for student transportation. There’s a fleet of nearly a half-million buses assigned to the job. Other countries rely, to varying degrees, upon a combination of school and public transportation for students, but many of the ideas in this article apply worldwide.

In the U.S., there are about 480,000 active school buses. Estimates vary, but they seem to carry between 1/3 and 1/2 of public school students and many private school students as well. Many of these buses travel multiple routes per day. This is a story about economics and the surprising impact of transportation on school budgets in the Corona and post-Corona era.

Basically, there are four types of school buses. Type A and Type B are smaller buses, Type D is very large (similar to a public transit bus), and Type C (“conventional”) is the model you most often see on the road. A Type C bus can seat as many as 75-80 students, but sitting three-across on a bench seat is neither fun nor suitable for the current era. It’s more comfortable to sit two-per-bench; assume 13 benches on each side of the bus, or 52 students sitting two-by-two.

Now, change your thinking. Two-by-two no longer works. Not at all. A bus that carried 52 students in 2019 could carry 26 students in 2020, but that would place students in every bus seat. I suspect they will require more space between them; alternating rows may be safer. That would reduce the carriage to 13 students per trip.

If students do not attend school every day, but instead adhere to a Monday-Wednesday (group A) and Tuesday-Thursday (group B) schedule, there will be continued chaos for parents and continued struggles with conducting school at home, but this approach would cut the need for bus transportation in half. If 26 students are traveling by bus, that could work, but if 13 students are traveling on those buses, we’ll need twice as many vehicles, and twice as many drivers (there is a continuing problem with driver shortages, so this will not be easy from a budget and recruitment perspective).

Typically, it takes about 30 minutes to clean a school bus. The treatment requires two passes, first to clean, then to disinfect. I’m guessing this occurred once or twice a day, but now, it must be done every time the bus is used. If a single bus does three runs, in each direction, that’s six cleanings per day—and the cleanings must be more intensive than before, probably requiring an inspection before the next run can begin. If those cleanings require, say, 60 minutes to do the job properly, that’s a full-time job for one person to clean one bus per day. If the cleanings can be done, safely, in 30 minutes per day, that’s still 240,000 new jobs for people who clean buses. It also messes with school schedules (which will probably be revamped anyway), and with 8-hour driver shifts (which will result in greater expense). If we pay each cleaning person $20 per hour (because the work is hazardous and because the lives of our children are at stake), and they work for 30 hours per week (4 days x 6 hours, plus organizational chores), that’s $600 per week, plus (I hope) 25% taxes and benefits, for a total of $750 per week for, say, 40 weeks in the school year, multiplied by 240,000 people. The annual expense would be $7.2 billion in the U.S.

In many countries, students travel to school on public buses and trains. Daily schedules are enhanced during to-from school hours. These vehicles would require a similar regimen, made more complicated by the lack of control—it’s not only students who travel these routes, but it’s also adults who may be less likely to submit to rigid rules.

Are people in the U.S. prepared to spend $50 billion within the next 12 months for safety in school busing? Even though the benefit is provided to half (or perhaps a third) of school children? Even if my numbers are wildly incorrect—and I hope you will offer corrections in the comments box below—they may be indicative of a broader scope of thinking about school economics.

Why focus on school buses? In the U.S., school transportation seems to account for about 5% of budgets, and it’s likely to increase. I suspect there is a similar line of thinking to be applied to teachers and to support personnel. For teachers, a Monday-Wednesday / Tuesday-Thursday split schedule might result in no additional effort (seems unlikely, but let’s go with that assumption), but the students working at home on those alternate days will require support. Ideally, there would be teachers in the classroom and teachers available to assist with home instruction, or, at least support staff. If we take the time to run the numbers—an exercise many districts and government agencies are beginning to pursue—it seems likely that Randi Weingarten’s initial estimate of a 20-25% increase would be correct.

For districts and government agencies who believe that this is the time for cutting school budgets, there is rethinking to be done. And reinvention.